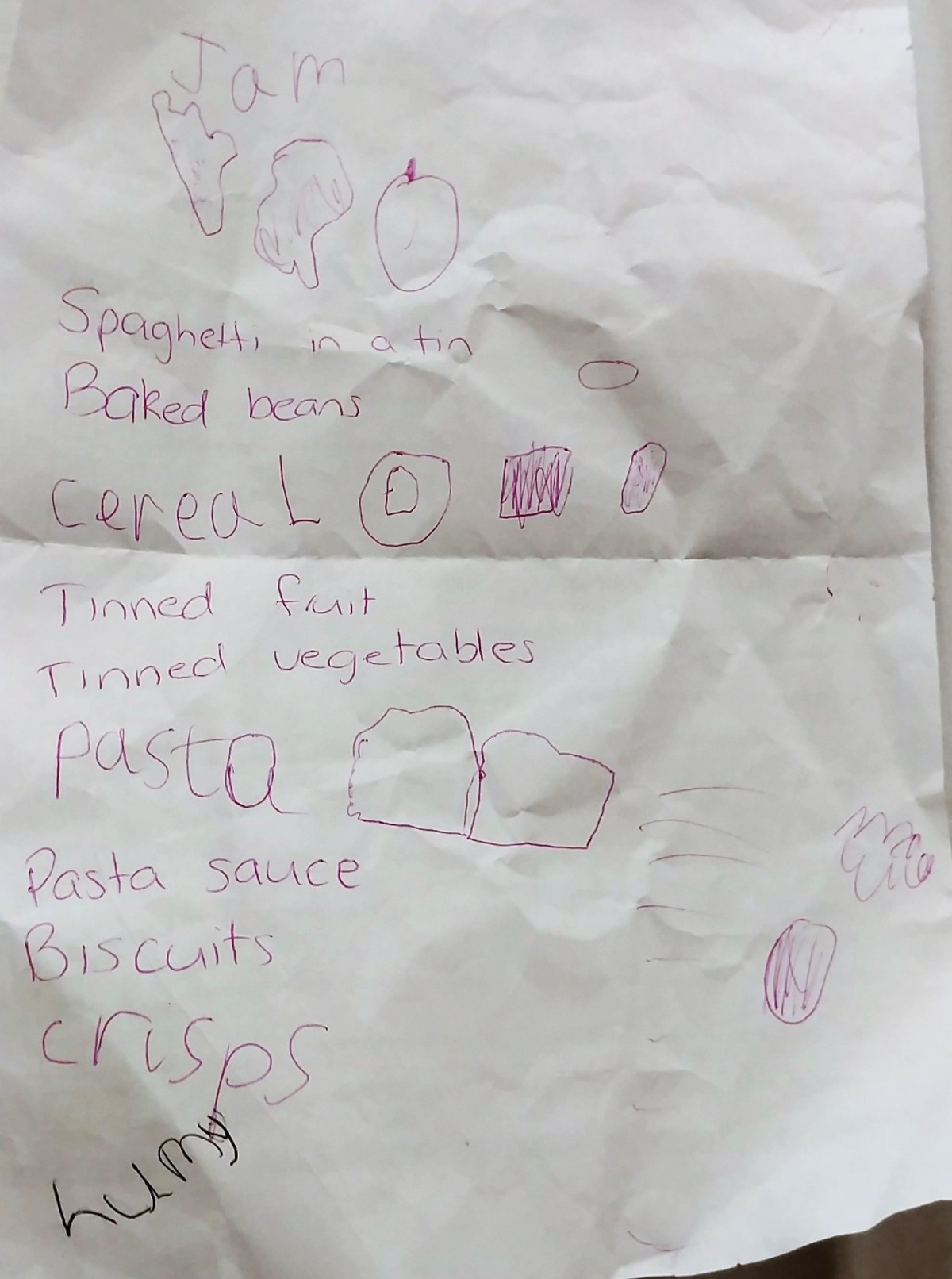 While at the supermarket one day last week with my Cousin’s 6 year old son, Eli, he spotted a trolley at the end of the registers with some food in it. His mother and I discussed that this was food for the families who could not afford food themselves, and people could donate food for these people as a way of being kind. His mother suggested that some time in the next week Eli and I could put some food into this trolley, especially for the children who are away from school (as it is summer holidays over here in the UK for 6 weeks) and not getting their free hot lunches. The plan was to connect Eli to his community and develop and understanding of others and their rights and needs.

The next day Eli and I used the internet to Google a list of foods that local food banks were looking for as we wanted to make sure we were giving foods that were needed, and not going to be wasted. Eli found the ones he thought would be best for children, picking things like jam, tinned spaghetti and cereal as these were foods that he enjoyed to eat. I suggested that other children may like other foods too, reinforcing the notion that the food was for other children.

The next day, while in the car on our way to visit Eli’s cousins for a play we were discussing the items again, recalling what we had seen on the list we found the day before. I asked Eli to think more specifically, listing types of cereal and flavours of jam that we could get. Eli suggested we ask Matthew, his older cousin, when we got to the house if he had any ideas, seemingly taking on board the discussion from yesterday that not everyone likes the same foods, and being open to suggestions from others.

When we got home Eli and I wrote a shopping list together. We negotiated that if he wrote some of the words, I would write others. Eli recalled each of the food types we had discussed as good ideas for the donations over the last couple of days. Eli drew different types of specific food types/flavours under broad headings like “jam” and “pasta”.

The day rolled around when it was finally time to do the shop, after a week of discussions and development of plans. We got a trolley and went around to each of the sections collecting items off the list. Eli recalled what he had drawn on his list and stuck only to those items. Strawberry, lemon and orange jams, specific types of cereals and pastas.

We had discussed that finding the cheapest options meant that we could buy more for the families that needed it, so we looked at price tags and found the best bargains. Eli problem solved what to do when there were no cheap coco puffs left, finding a similar shape and flavour product to match his drawing on the list.

We filled the bottom of the trolley with jars and tins and the top was filled with boxes. As we went to get the pasta Eli asked if the shell pasta was for us at home and I told Eli that we would do a shop for us once we had finished this task, showing him my other shopping list for the house. “Oh yes, this trolley is just for being kind, we are coming back in after”. This showed that Eli was understanding what we were achieving. I asked him to take a photo with the trolley looking “kind” and this was his interpretation, which seemed apt as he was being a hero to some less fortunate families.

He enthusiastically helped place all the items on the conveyor belt and stack them back into our trolley then into the food bank trolley which had recently been cleared out so there was very little in it. When we had finished Eli announced “look, it is more than half full now, that’s all our food for the families”. Eli appeared proud of our efforts to help out other families.

By being involved in the process from the beginning to the end Eli seems to have developed an understanding of kindness and thoughtfulness for others, connecting him as a global citizen and advocate for others. Eli also had the opportunity to share his ideas and engaging with the different steps of the process to complete the task.